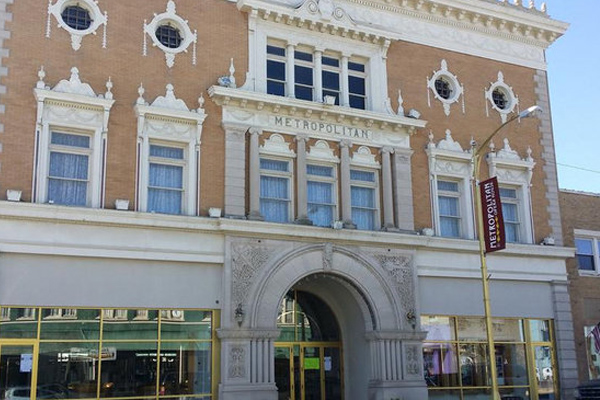 The Metropolitan Opera House opened its doors in 1899.

It was the grandest structure built for miles. The ladies dressed in gowns made especially for the occasion. Their escorts had paid $2.50 for the tickets. The famous comedian, Tim Murphy, was the star. The play for opening night was “The Carpetbaggers.” The theatre opening was the biggest social event in the history of Iowa Falls. In his private box on the right side of the stage sat Eugene Ellsworth, millionaire philanthropist, who built the ornate structure. Ellsworth, who had parlayed his father’s livery stable and an 1868 venture selling prairie chickens to eastern gourmets into a vast fortune in real estate, is Iowa Falls’ most prominent and one of the best-liked residents.

In 1882, he built and then sailed the first steamboat ever seen on Spirit Lake. It was named Alpha. Ellsworth’s newest project-The Opera House-was as modern as the steamship was in 1882. The keystone of the arch over the entrance sported a carved bust of Shakespeare, and on either side were carved musical emblems and the masques of comedy and tragedy. On the right side of the stage was the Ellsworth box, and on the left another box for visiting dignitaries. Both were furnished with plush drapes and tapestry upholstered chairs, and the lobby, decorated in Pompeiin red with ivory trim on the tapestried walls.